ReaDivivus is a parallel software system designed to run on computer clusters and is capable to solve large scale deterministic and stochastic reaction- diffusion (RD) problems up to 3D.

Reactions, diffusion and patterns in nature 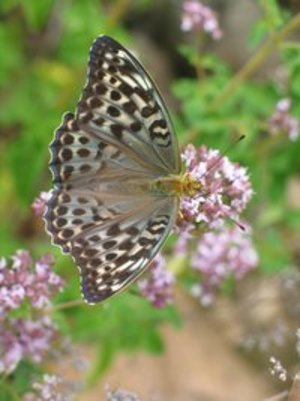 How is the pattern on the wings of a butterfly formed?

How can the genes determine the shape of our face or hand? How are the different patterns of animal coatings formed? What determines the composition of the different naturally formed chemical patterns like pigmentation of the wings of a butterfly, the stripes in agate rocks, or the so-called Liesegang rings?

The answer for these and similar questions is usually a properly constructed reaction-diffusion mechanism that mathematically can be formulated as a set of coupled non-linear partial differential equations. Unfortunately these equations usually cannot be treated by standard analytical mathematics. Due to this mathemaical complexity there are many unsolved problems on this field of science. 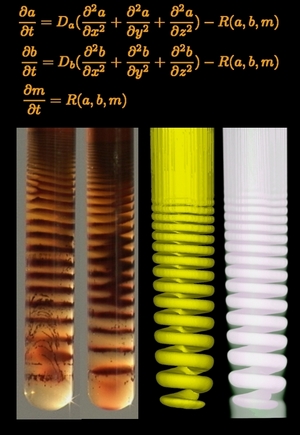 Why do sometimes helices appear in periodic precipitation patterns and why not other times?

Construction of a possible RD-mechanism and the corresponding equations is a relatively easy task. However due to the above mentioned mathematical problems its validity can be checked only by computer simulation.

RD-systems are generally far too complex for human thinking. One cannot easily predict the possible effects that such a system can produce. At the same time when we try to explain a certain RD problem there will be many possible models that are based on chemically or physically completely plausible effects and have only one drawback: they simply do not work. In these cases the only thing we can do is to construct a slightly different model, and try it again and again.

ReaDiVivus is a toolset that can help this trial-and-error process, because in most of the cases formulation of a new mechanism requires only several lines of coding.

A case study: the Liesegang phenomenon 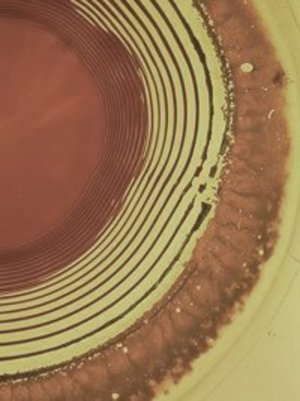 ReaDiVivus has grown out from a former scientific project the goal of that was the elucidation of the mechanism of periodic precipitation, often called Liesegang phenomenon.

Capabilities of the system are demonstrated here by the results of this work.